PM: Let our lives be not just successful (Safal), but also meaningful (Saarthak)

The Prime Minister, Shri Narendra Modi, today described the Late Shri Eknath Ranade as a person who inspired us to make life not just successful (Safal), but also meaningul (Saarthak). He was speaking at the inaugural ceremony of the 'Mananeeya Eknath Ranade Janm Shati Parva' in New Delhi today. 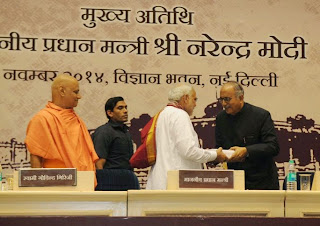 Shri Narendra Modi said Shri Eknath Ranade should inspire us to create an India that is both bhavya (prosperous) and divya (spiritual). He said India`s poor seek prosperity, and the world seeks spirituality from India.  The Prime Minister said Shri Ranade's mission was to prepare youth of Swami Vivekananda`s dreams. He appreciated the work done by the Vivekananda Kendra in the North-Eastern states. He said Shri Ranade indeed lived up to the motto of "One life. One mission." 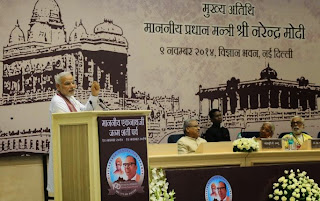 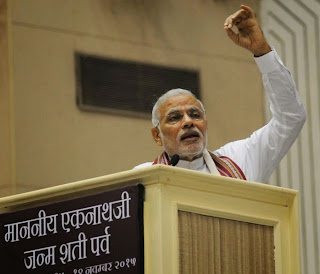 The Prime Minister spoke at length about his personal experiences with Shri Ranade, calling it his good fortune that after working with Shri Ranade in his formative years, he was today participating in his 'Janma Shati Parva.' He described Shri Ranade as a perfectionist. Referring to Shri Ranade`s role in the creation of the Vivekananda rock memorial at Kanyakumari, the Prime Minister said Mr. Ranade paid attention to minor details like which direction the statue`s eye will look at, and what anti-corrosion material should be used to ensure the statue`s longevity. 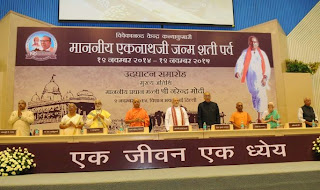 The Prime Minister also praised Shri Ranade as a unifier and one who laid stress on people`s participation – Jan Bhaagidaari. He said he had sought support from leaders across the political spectrum, for the construction of the Vivekananda Rock Memorial. He said many, many Indians above the age of 40, would recall donating a small sum of money for this memorial, and were hence part of it. 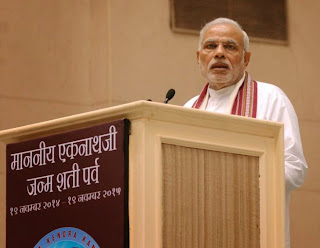