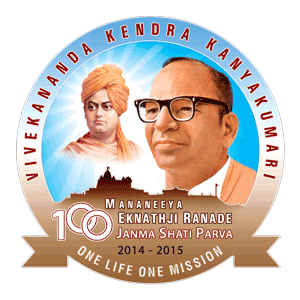 When we study the life of Eknathji, it looks  as though the Divine Will was preparing him  for this ultimate task which was to be the  crowning glory of not only his life, but was also to enshrine within it, the hopes and aspirations  and the Shraddha and Bhakti which millions had cherished for the great Swami Vivekananda.  There is no monument in modern India which  glorifies the spirit it enshrines and the builder  as well. Like the Song Celestial which purifies  the listener and the speaker, so has the Rock  Memorial glorified the ideal and the idealist.

“Only the land which mothered the Gita, could  have brought forth such a Karmayogi; only in the land of Himavan, Vindhya and Sindhu can  you meet such a lion who practises self-restraint.

Only in the country where flows the Ganges can  you find such a ‘Kalpavriksha’ which has for its fruit, auspiciousness alone.......”

A life which began humbly in the village of  Timtala in Amaravati district, Maharashtra, by sheer pursuit of excellence, by indomitable  will, courage and total dedication to the cause  and ideals he cherished rose to the pinnacle of  glory and in the process of carving out of rock,  a magnificent monument to one of the greatest  sons of this Motherland, turned his own life  into LIFE  EVERLASTING. His life and work  come as an answer to the vague cries of men,  about the lack of opportunities, even for service.  Opportunities knock at everyone’s door. To one  who is ready to transform oneself first, those  very same opportunities become the vehicles to  change one’s life into LIFE EVERLASTING.