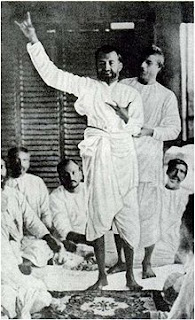 "'I shall make the whole thing public before I go,' the Master has said some time before. On January 1, 1886, he felt better and came down to the garden for a little stroll. It was about three o'clock in the afternoon. Some thirty lay disciples were in the hall or sitting about under the trees. Sri Ramakrishna said to Girish (Ghosh), 'Well Girish, what have you seen in me, that you proclaim me before everybody as an Incarnation of God?' Girish was not the man to be taken by surprise. He knelt before the Master and said with folded hands, 'What can an insignificant person like myself say about the One whose glory even sages like Vyasa and Valmiki could not adequately measure?' The Master was profoundly moved. He said: 'What more shall I say? I bless you all. Be illumined!'* He fell into a spiritual mood. Hearing these words the devotees, one and all, became overwhelmed with emotion. They rushed to him and fell at his feet. He touched them all, and each received an appropriate benediction. Each of them, at the touch of the Master, experienced ineffable bliss. Some laughed, some wept, some sat down to meditate, some began to pray. Some saw light, some had visions of their Chosen Ideals, and some felt within their bodies the rush of spiritual power."

From the Introduction to THE GOSPEL OF SRI RAMAKRISHNA,
by Swami Nikhilananda

"Those words of profound blessing, untouched by the slightest tinge of selfishness, directly entered the devotees' hearts where they raised high billows of bliss. They forgot time and space, forgot the disease of the Master and forgot their previous determination not to touch him till he recovered, and had the immediate feeling that sympathizing with their misery, and heart overflowing with compassion, had come down to them from heaven and called them affectionately to Him for protection, like a mother sheltering her children against all ills."

From SRI RAMAKRISHNA, THE GREAT MASTER
by Swami Saradananda