How Yoga Won the West 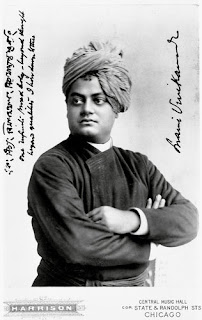 Ann Louise Bardach is a writer at large for Newsweek. She is working on a biography of Vivekananda.

THE party planning is in full swing throughout India. Never mind that the big day, Jan. 12, 2013, commemorating the 150th anniversary of the birth of Vivekananda, is more than 15 months away. Not too long ago, Vivekananda, a household name in his homeland, was famous here as well, as the first missionary from the East to the West.

If you're annoyed that your local gas station is now a yoga studio, you might blame Vivekananda for having introduced "yoga" into the national conversation — though an exercise cult with expensive accessories was hardly what he had in mind.

The Indian monk, born Narendranath Datta to an aristocratic Calcutta family, alighted in Chicago in 1893 in ochre robes and turban, with little money after a daunting two-month trek from Bombay. Notwithstanding the fact that he had spent the previous night sleeping in a boxcar, the young mystic made an electrifying appearance at the opening of the august Parliament of Religions that Sept. 11.

For most of the rest of the month, Vivekananda held the conference's 4,000 attendees spellbound in a series of showstopping improvised talks. He had simplified Vedanta thought to a few teachings that were accessible and irresistible to Westerners, foremost being that "all souls are potentially divine." His prescription for life was simple, and perfectly American: "work and worship." By the end of his last Chicago lecture on Sept. 27, Vivekananda was a star. And like the enterprising Americans he so admired, he went on the road to pitch his message — dazzling some of the great minds of his time.

Yet precious few of the estimated 16 million supple, spandex-clad yoginis in the United States, who sustain an annual $6 billion industry, seem to have a clue that they owe their yoga mats to Vivekananda. Enriching this irony was Vivekananda's utter lack of interest in physical exertions beyond marathon sitting meditations and pilgrimages to holy sites.

Yoga to the man who most famously delivered its message to America meant just one thing: "realizing God." He abhorred channeling, séances and past-life hunts as diversionary. Worse, the great seer savored a good smoke, and on occasion chowed down on meat.

Among those who never doubted the messenger during his lifetime was Leo Tolstoy. The restless Russian was especially keen for writings on Ramakrishna, Vivekananda's own guru. Two years before his death, Tolstoy wrote, "Since 6 in the morning I have been thinking of Vivekananda," and later, "It is doubtful if in this age man has ever risen above this selfless, spiritual meditation."

The Harvard philosopher and psychologist William James was fascinated by the 31-year-old Indian and quoted at length from Vivekananda's writings in his seminal work, "The Varieties of Religious Experience."

The novelist Gertrude Stein, then a student of James's at Radcliffe, reportedly attended Vivekananda's 1896 talk at Harvard — which so wowed the college's graybeards that they offered him the chairmanship of Eastern philosophy. He declined, noting his vows as a monk.

A later convert to the mystic's writings was Aldous Huxley, who wrote the foreword to the 1942 English-language edition of "The Gospel of Sri Ramakrishna," which he described as "the most profound and subtle utterances about the nature of Ultimate Reality." Along with his friend Christopher Isherwood, Huxley was formally initiated at the Vedanta Center in the Hollywood Hills, where the two sometimes gave the Sunday lecture, often attended by their friends Igor Stravinsky, Laurence Olivier, Vivien Leigh, Somerset Maugham and Greta Garbo.

In 1945, Henry Miller, famous for his sex-drizzled novels, reported that his most important discovery of recent years was "two volumes on Ramakrishna and Vivekananda." By 1962, Miller concluded that "Swami Vivekananda remains for me one of the great influences in my life."

J. D. Salinger's commitment went deeper and he would leave Vedantic footprints in his work, often via his frontman, Seymour Glass. In his last published work, "Hapworth 16, 1924," Salinger has Seymour hawking the wisdom of Vivekananda with the avidity of a pitchman on the Shopping Channel, calling him "one of the most exciting, original, and best equipped giants of this century I have ever run into; my personal sympathy for him will never be outgrown or exhausted as long as I live, mark my words; I would easily give 10 years of my life, possibly more, if I could have shaken his hand."

The waning of Vivekananda's popularity in America began around the time the baby boomers commandeered the yoga business and the ascetic seams between the New Age and the Old Age inevitably frayed. Vivekananda, who always took the long view, might have been amused. His enthusiasm for America was boundless and, quite fittingly, he died on July 4, 1902. He was just 39 years old, but was exhausted from ceaseless work and untreated diabetes. He had returned to India and was living in the monastery he founded outside Calcutta. He excused himself for the evening and went into his room, meditated awhile, then took two deep breaths — and passed away. Earlier, he had remarked, "I have given enough for fifteen hundred years." He was done.