India has a long history of martial arts. Martial arts is a part of India's ancient culture and a traditional games. Originally a traditional form of martial art that started in South India, and now it has different names and different forms in the culture of the regions in India. Khusti The Indian Wrestling is also a part of Indian Martial arts found throughout the India. Indian martial arts has an important influence in the development of modern Asian martial arts. Nowadays a sense of self-defense and for fitness lots of people are opting for martial arts.Shaolin Kung Fu, a term that includes a large variety of Chinese martial arts, traces its lineage to Bodhidharma, the Indian monk who, according to popular legend, introduced Buddhism to China during the 6th century AD. Monks at the Shaolin Temple (located in Henan Province), still study a combination of martial arts and Buddhist teaching today. 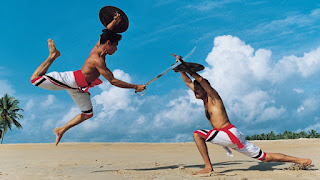 Often known as the 'Mother Of All Martial Arts', this 3000-year old art form originating from Kerala, draws inspiration from the raw power, swift movements and sinuous strength of majestic animals – the lion, tiger, elephant, wild boar, snake and crocodile. The term 'kalari' refers to the place where this combat style is taught while 'payattu' means to practise. This combat style has different levels through which one learns how to fight, with and without, hand-held weapons. It has lately emerged in a new avatar as a source of inspiration for self-expression in contemporary dance forms, theatre, fitness techniques and movies too! This legendary warrior art form most was recently popularised by 76-year-old Meenakshiamma's heroic exhibition of swordplay against a man half her age. 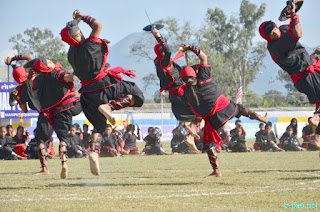 Thang-Ta, which literally means 'sword and spear', is one aspect of Huyen Langlon (art of war or method of safe guarding), a traditional martial art from Manipur. Its other aspect is Sarit Sarak that involves unarmed combat.  This martial art form integrates various external weapons – the sword, spear and dagger- with the internal practice of physical control through soft movements coordinated with breathing rhythms. However, the heart of Thang-Ta is the sword. There are hundreds of different sword drills that teach the basic strokes and stepping patterns of this fighting style.

Closely linked to Kerala's Kalaripayattu, Silambam is an ancient stick-martial art of Tamil Nadu. According to Sangam-era literature, there were a number of exercise 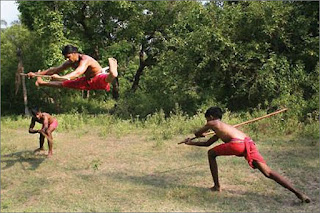 centres called silambak-koodams all over the Dravida Nadu region, and the age-old art—patronized by the Chera, Chola and Pandya rulers—is recorded as one of the 64 art forms of ancient India. The word 'Silam' (in Tamil) stands for hills and 'Mambam' (the Marhat word for bamboo) stands for bamboo from the hills; these sticks are usually found on the hills in that particular region. This martial art's salient features are its well-structured techniques, fluid footwork, and smart fighting strategies. 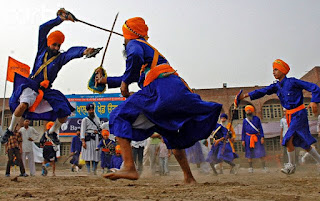 Originating from the state of Punjab, Gatka is believed to be a battle technique created by Sikh warriors during the martial period of great Sikh Gurus. A style of stick fighting between two or more practitioners, Gatka is a toned-down version of the deadlier Shastar Vidya, the fighting style of the fearsome Akali Nihangs, the blue-turbaned sect of Sikh fighters banned by the British after the Anglo-Sikh wars. The sharp swords of Shastar Vidya have been replaced by wooden sticks (soti) and shields (farri) in Gatka.

Sqay is an ancient martial art traditionally practiced by the people of Kashmir. Armed sqay makes use of a curved single-edge sword paired with a shield, while unarmed techniques incorporate kicks, punches, locks and chops. Under the International Council Of Sqay's rules, the sword (tora or tura) is made of synthetic fibre covered in leather. The sword is paired with a shield (bargula) measuring 9-19 inches in diameter, also covered in leather. The official uniform is blue, sometimes with red or yellow piping, consisting of trousers and a cross-front jacket with a belt around the waist. Competitors are judged on stance, timing and perfection of form.

Originally from Maharashtra, Mardani Khel is a weapon-based martial art form. It owes its development to the geographic conditions of the state (hills, caves and valleys). A very ancient form of art, it 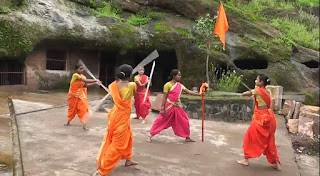 saw its emergence during the Maratha dynasty. Kolhapur used to be the centre of the Maratha kingdom and the villages around it had talims (training centres) where skilled elders prepared youngsters for war. After the revolt of 1857, the British banned the use of weapons and the talims were forced to turn mardani khel into a folk game to ensure its survival. The use of weapons such as swords, katyar (dagger), lathi-kathi (bamboo sticks), veeta (darts), bhala (javelin), dand and patta (long-bladed swords) continued but the moves were made more stylised and less lethal.

A form of traditional wrestling, Kushti developed during the Mughal Empire by combining the native sport of malla-yuddha (combat wrestling) with influences from Persian varzesh-e bastani (warrior athletics). Interestingly, the words pehlwani and kushti derive from the Persian terms pahlavani and koshti respectively. Once a sport that used to hold great importance in Indian society, at present, Kushti is only practiced in a handful places around India. Kolhapur is one city where the time-tested sport is as popular as ever with rural families frequently sending boys to learn the art at Kolhapur's thalims or akharas – traditional wrestling schools.

When moved back and forth like a sword and aimed at someone, it cuts through the air, lands with a thwacking sound, peels off a thin layer of skin and sends waves of numbing pain through the body, even as it splinters bone. One hard blow is numbing. This innocuous-looking weapon of destruction is the lathi, the Indian police's most used crowd control device! Traditionally practised in many parts of India, the lathi (usually a bamboo stick) can be wielded in many ways to give quick lethal blows to the opponent as well as in self-defence by using it as a shield.