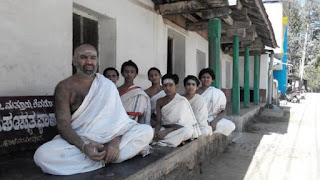 A village in the southern state of Karnataka where most residents speak Sanskrit is in focus at a time when the Indian government's insistence on promoting the ancient language has sparked a debate over the role it plays in the lives of people in the country now. The BBC Hindi's Imran Qureshi reports from the village.

Mattur, in Shimoga district, about 300km (186 miles) from the state capital, Bangalore, appears quite oblivious of the raging debate in India over the recent government order to replace German with Sanskrit in central schools.

Here, ordinary shopkeepers and agricultural labourers speak in Sanskrit - or at least understand it. Most children too speak the language fluently.

The phrases most heard on the streets here are "katham aasthi" (Sanskrit for how are you?) and "aham gachchami" (I am going).

Professor MB Srinidhi, a resident of Mattur, says the current controversy is unnecessary.

"Just like the European languages are spoken in Europe, we also need to speak in Sanskrit. The interesting aspect is that Sanskrit is a language that will help in understanding not just Indian languages but also German or French," he told BBC Hindi.

Sanskrit belongs to the Indo-Aryan group of languages and is the root of many Indian languages.

In ancient India, it was the main language used by scholars and was sometimes referred to as devabhasha - the language of gods.

Today, it is spoken by less than 1% of Indians and is mostly used by Hindu priests during religious ceremonies.

Until the early 1980s, villagers in Mattur spoke the state's regional language, Kannada, as well as Tamil because of the large number of labourers who settled here centuries ago from the neighbouring state of Tamil Nadu.

"Then there was a movement in favour of Sanskrit. Sanskrit had been criticised as the language of the [upper caste] Brahmins and suddenly displaced from the pedestal with Kannada," said Prof Srinidhi.

"The priest of [the local religious centre] Pejawar Mutt gave a call to make Mattur a Sanskrit-speaking village. It took just two hours daily for 10 days for the entire village to start conversing in Sanskrit," he added.

Since then, Sanskrit is being spoken not just by the Sankethi Brahmins of the 3,500-strong village, but also by communities from the socially and economically underprivileged sections of society.

Sankethis are a small community of Brahmins who originally came from the neighbouring state of Kerala and settled down here centuries ago.

There are only around 35,000 Sankethis in India and their language - also called Sankethi - is a mix of Kannada, Tamil, Malayalam and some bits of Telugu.

Today, 150 of the 400 students in the local Sri Sharada Vilasa school study Sanskrit as the first language, with English as the second language and Kannada or Tamil or any other regional language as their third language.

The school's Sanskrit teacher, Ananthakrishna, asks one of his best students, Imran, a question in Sanskrit. "His interest in Sanskrit is amazing," he explains.

The influence of Sanskrit is, indeed, strong in Mattur. For housewife Lakshmi Keshava, who normally speaks Sankethi at home, shifting automatically to Sanskrit when she gets angry with her son or family members is normal.

It's not very different for Tamil-speaking Chitra, an agricultural labour: "We understand Sanskrit. Some of us cannot speak it, but our children do speak the language."

"Sanskrit is a language that teaches you old traditions and values. It's a language of the heart and cannot die," says Sanskrit scholar Aswathanarayana Avadhani.

Many of Mattur's young have gone abroad to study engineering or medicine and I ask if Sanskrit helps in developing a mindset that aids understanding other languages, including those used in computer sciences.

Shashank, who runs an IT solutions company in Bangalore, says: "Yes, there is a connect if you delve deep into Sanskrit. Those who have gone into Vedic mathematics [which dates back to a time in ancient India when Sanskrit was the main language used by scholars] have certainly got a logical mindset that helps in information technology."

"I have learnt some Vedic maths that has helped me. Others use a calculator when I could just do all that without a calculator."