According to our History there were 12 Surya Mandir in India. According to ancient literature and scriptures, the Hindus refer to the Sun as the storehouse of unlimited energy. In our country, the Sun god is referred to as Aditya or Surya. Sun temples are basically buildings and structures which are used for spiritual and religious activities regarding the Sun god. Sacrifices intended to the Sun good are also practiced in these buildings. Apart from India, Sun temples are also located in Japan, China, Egypt, Peru, etc. In India, there are many ruins of such temples as well. Some of them were excavated later on and new temples were built on those locations. Sun God is typically depicted riding seven horses on a chariot, which represent the seven colors of a rainbow.

The earliest known Sun temples were in the caves, where murals of Sun were discovered on the walls. The most famous Sun temple in the world is Konark in Orissa, which is also a world heritage site. Some of these ancient temples were destroyed by the Islamic invasions, but their ruins continue to marvel the world with many secrets being uncovered each day. 1 : The Bhramanya Dev Temple At Unao:
This temple is located on a place called Unao in Madhya Pradesh. It gets visits form devoted worshipers all around India and the surrounding areas also act a famous tourist destination. This well-visited temple is well known for the recoveries people got from her. Some got themselves relieved from blindness, skin diseases, etc.The highlight of this temple is the deity which is placed on a brick platform and is wrapped up in black plates. The idol is engraved with twenty-one triangles, which represent the 21 phases of Sun.

2 : Sun Temple At Surya Prahar:
This Sun temple is located in Surya Prahar in Assam. The temple is situated on the hill and is a popular religious site for the local people. The main attraction of this temple is the circular tablet made of stone which displays a number of images of the Sun god. According to ancient Sanskrit literature, there are actually 12 different Aditya's or Sun gods.It is located near the banks of Brahma putra river and is one of the most famous sun god temple place in East India.

3 : Suryanar Temple Near Kumbakonam:
The Suryanaar temple is located near Kumbakonam in Tamil Nadu. This popular temple manifests the magnificent Surya god. The temple educates the visitors about the different celestial bodies in the universe. The temple was constructed in Dravidian style and is one of the most beautiful and well-constructed worship places in India.The idol of Suryanarayana is in a standing position and has his two wives – Usha and Chaya standing on either sides. 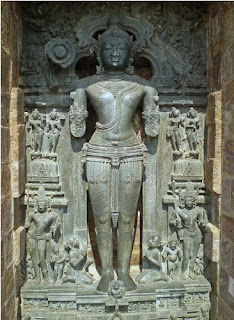 4 : Suryanarayana Swamy Temple In Arasavalli:
This Sun temple is located in Arasavilli in Andhra Pradesh and the Sun god in this temple is a well-maintained state. The temple was constructed during the 7th century by a Kalinga king. Inside the temple, there is an image on a tall black granite holding lotus buds which is the actual image of worship for the Sun god worshipers.As per legend, Sage Kashyap installed the idol of Surya Narayana in this temple. Every Sunday is an important day in Arasavilli Surya Devalayam and many devotees come to seek blessings.

5 : The Dakshinaarka Temple At Gaya:
In Gaya, Bihar there is a famous Surya Bhagavan temple in India which is known by the name of The Dakshinaarka temple. In this temple, worshipers make their offerings to their ancestors at the Dakshina Maanas tank which is situated in front of the temple. In this temple, you will find numerous old images of the Sun god which you will find nowhere else. The temple is also of high historical significance as it was constructed during the 13th 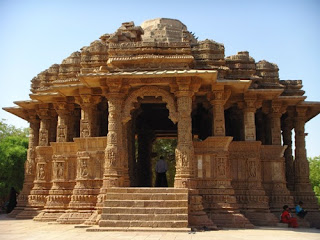 century under the supervision of a king who was a devoted worshiper of the Sun god. This temple is also one of the oldest and most visited religious sites in Bihar.

6 : Surya Mandir Konark (Sun Temple Orissa):
The Sun temple located in Konark, Orissa is known as Konark Sun Temple. Konark Surya Mandir was constructed during the 13th century. People come to visit this temple from all over the globe to observe the magnificent architecture of the Konark Sun Temple. It is also known as Black Pagoda temple by the locals. As per Konark temple history, the current structure was built by Narasimhadeva I of the eastern Ganga dynasty and is one of the very few Indian temples whose plan and blue print written in Sanskrit is preserved till date.The entire temple was constructed to resemble a 100 feet Chariot, all carved from sandstone. The temple is now in ruins and is declared as UNESCO World Heritage site in the year 1984. Konark temple images are also the most widely downloaded pictures of an Indian temple in the world.

7 : Sun Temple At Modhera:
This Sun temple is satiated in Modhera, Gujrat and was built in 1026. The temple was designed in such a manner that the rays of the sun would enter the temple properly and would directly fall on the image of the Surya.The temple now has no worship and is a protected monument maintained by the Archeological Survey Of India. This temple has three main areas- The Gudhamandapa, the Sabhamandapa and the Kunda.Modhera sun temple is one of the prominent Surya mandir in India.