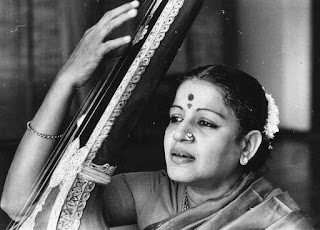 In this Samarth Bharat Series, we try to look in various accepts. Here everything is for the worship of Iswara weather it is Art, Science or Social Work. Everything we offer to Iswara. Today we are going to get some brief idea about Carnatic Music

The origin of Carnatic music , or the South Indian classical music often called as karnataka sangitham can be traced back to the age of vedas . Bharata's Natya Sastra, from around the 5th century A.D., and Saranga Deva's Sangita Ratnakara, from the early 13th century A.D., are considered the to be the earliest recorded documents available on the theory and performance of Indian classical music, especially carnatic music (karnataka sangeetham). The history of Carnatic music or karnataka sangeetham is incomplete without stating about the contributions made by the saints Sri Purandharadasaru ( 15th century A.D.), Sri Thyagarajar, Sri Shyama Sastri ( all of 18th century A.D.), and left an enduring legacy of compositions. This tradition has a rich heritage and is carnatic music singer perfectly attuned with Indian culture and religion. Carnatic music is based on a 22 scale note (swaras) on contrary to the earlier 12 note scale that is used in the western classical music. But in all its practical aspects and puposes, not more than 16 notes are generally used. A unique combination of these notes, or swara as they are said to evolves separate ragas. The features and the constraints of a raga will be clearly defined in the arrangement of the notes in its arohanam ( ascending notes ) and avarohanam ( descending notes ). Thus, in Carnatic music, the raga connotes a mood or a route in which the music is supposed to travel. . Different combinations of the notes gives rise to different raga. Thus, there are thousands of unique raga as per theory though very few of them are being used for performances in the present day. gamaka and brighaa are the two most important features of the ragaa. The former refers to the modulation of the frequency of a particular swara and the latter refers to the speed with which the musician performs a set of swaras or notes. Both the gamaka and the brigha helps to improve the appeal of the composition that is rendered . Western music is often based on a pattern of flat notes, on the contrary, here, the swaras are performed using various modulations. The brigha could be often 8, 16 or so on. Another very important aspect of the Carnatic music or karnataka sangeetham is the thalam or the rhythm. The thalam is the rhythm of the piece that is being performed . Today, there exists more than hundred thalams, but here also, very few of them are in use. The most popular thalam have three, four, five, seven or eight beats in them.

The Melakarta Ragams in carnatic music
The Melakarta Ragams refers to the basic 72 Janaka (parent) ragams for all of the infinite number of other ragams in Carnatic Music. All of these ragams have seven notes saptaswaras, that is that they have all seven swaras which are- Sa, Ree, Ga, Ma, Pa, Da, Ni, and Sa. The system is further divided into two sets of 36 ragams each - The first set with the first Ma and the second with a sharper Ma. This is very similar to the Western concept of scales and the circle of flats.

Sapta Talas
This system of talams is the rythmic basis for Carnatic music. It is based on 7 core talas which use only 3 of the 6 possible components of an Indian talam - Anudrutam, Drutam, Laghu, Guru, Plutam, and Kakapadam. The Seven Talams are Dhruva, Matya, Rupaka, Jhampa, Triputa, Ata, and Eka Talams. Using these sapta talas all of the 150 Carnatic talams can be derived.

12 Chakras of music the mind, body and soul
Indian classical music, philosophy, yogic teachings - many of these are attributed to have its roots in the four vedas. In the human endeavour of our self-realization and awakening towards the oneness with the nature and the creator, classical music, philosophy and yogic teachings are all considered as the experiential tools. For centuries, we have excelled in exploring various aspects and are constantly redefining with every passing phase of time and years. But at the core of it are these ever so relevant well-defined principles and tenets – principles that provide the unity and the synergy of power. Be it in the form of millions of musical notes that cast a magic spell, or the control of our body and mind to lead us to greater heights. These do lead us to the path of happiness... utter bliss. These have no geographic barriers and transcend across all nations and culture. Larsen and Toubro Limited, India's largest engineering and construction major recognizes and cherishes these Tenets and Principles that live beyond time. Principles and Values that never change but get to redefine its relevance within modern times, thereby making it stay for ever - as a classic beyond time and ages.