Your sweet X'mas note was too lovely. As for the poem—I have no words which to express it, It is head and shoulders over other years — and I do hope you won't forget to send me the card. Swami has not yet started for Europe—but Mrs. Bull and Miss MacLeod have. They will be in London early in February till the 21st and you must call. They know you both well already. I hope you will also meet them at Brantwood. I am just on tenterhooks to feel that they have had a glorious reception from my friends, for they have been angels of love and goodness to me.

Swami is at a health-resort up the river. Health said to be much the same. Miss Muller has severed all connections with the Movement, and calls this "giving up Hinduism and returning with joy to X'tianity." It was news to me that any of us had yet left X'tianity. The monks have given a delightful proof of character. I have not heard an unkind word from one of them about her--and she has done all she could to give publicity to her new attitude. I think I told you already that my work was receiving no financial support from her anyway. So there is no consequence in this, for me—I mean in that way.

When I sit down to write to you I want hours to write in, but for many weeks now I have been sacrificing everything to the story of our summer which I have been writing for Mrs. Bull and Miss MacLeod. I feel sure they will let you see it when it is ready—if I can get it to London in time—and I know that will be better than letters. They will bring photographs also of Sri Ramakrishna's widow—who looks upon all of us as her "Children" and sends her blessings, but this photograph is not for general distribution. So don't refer to it first! It is her birthday today.

I never was able to answer your political warning. I was broken-hearted about Mr. Beatty's attitude. I thought he cared for justice first and the last. Anyway, some of you must help me to get this matter noticed, and for the rest dear Nell, I am not going to take any violent steps. My work is here for the present, as you ll say, and of course I never thought of throwing it up suddenly. Perhaps I said outrageous things-perhaps I was wrong to talk of "politics" at all, but somehow or other I feel sure it will be given to me to utter the deep, heart-felt feeling and meaning of our English nation and sooner or later my work will be recognised as real "politics".

I don't mean my 'dame's school' as Miss Muller call it, but my work is going down into the heart and meaning of the people and interpreting it as must be the result. This all sounds just as absurd to me as to you, but it won't prove so.

If not the action, then the reaction, will be political. I agree that I have no ability for the game of politics, but the real movers of forces are not gambles,they are sincere and earnest to the core.

About my paper. Thank you so much for all your kind encouragement. Mr. Sturdy said I should find myself receiving so many impressions of England in India shortly that I would be sorry to give publicity to my first. I am of course receiving new impressions, but not with this result so far. I think perhaps as a general impression those observations were fairly correct. As time goes on, I shall differentiate between classes of English in India – making special studies of Army, Civilian and Mercantile Groups, So far, my best impressions come from the last.

How egoistical all this sounds, and perhaps it is really only breathless.

I am so pleased to hear of your seeing so much of the Beattys.

Max Mulller's life of Sri R. K. is just out. They say it will sell like wild fire in India.

I am finding great riches in Bengali. If Mr. Hammond would learn it he would make his fortune by translations. I have undertaken a play. I can not understand why we have never heard of these things. From all accounts this play would stand comparison with Iben's "Brand". Is it that the only English who learn Bengali are officials and Missionaries, and has not a single member of these class ever had the wit to interest himself in the literature of the people? I can not believe this!

Have you read Havelock Elli's "Affimations"? It looks glorious. A Hindu friend showed me a copy the other evening. Oh what a country this is! Talk about strong character! Some day I will write you a letter giving you charaterisations of people I have met. Against the monotonous, collective-coloured background of these community-houses and unlettered women, you get every now and then a horridly-painted individuality which is like a romance – and always always the expression is in religion. So far I have not been able to find anything that I could satisfy myself was honest fetish-worship at heart, but as Brhmo samaj people all assure me that India is "Idolatrous" I will e'en a little longer to be sure.

So glad you are going to know Mrs. Bull. Happy New Year. 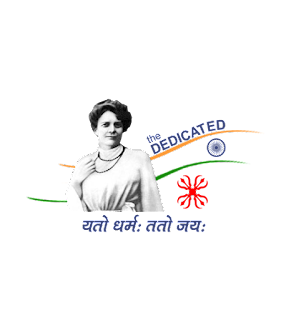