Kanyakumari & her penance on one foot: The hidden meaning 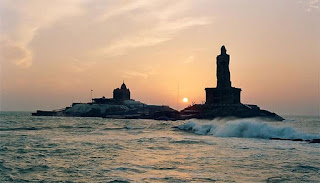 At the southernmost tip of mainland India, the ocean roars; it heaves and sighs as if enthralled by the spectacular glimpse of two black boulders jutting out of its bosom and bearing on them testimonies of India's greatness.

On one rock stands the statue of Tamil saint Thiruvallur and on the other, larger one, is built the Vivekananda Rock Memorial. It is the same consecrated cairn on which many millennia back Goddess Parvati had stood in penance on just one foot as a virgin girl, praying to obtain Lord Shiva as her consort.

Legend has it that Sati immolated herself after her father Daksha insulted Lord Shiva by neither inviting him to his yajna nor keeping a portion for him in the special ceremony. She then took birth as the daughter of Himalaya and practiced severe austerities so as to obtain Shiva as her husband again.

While the descriptions of her rigours are varied, one specific form of meditation that she undertook was by standing for several years on just one foot and praying.

On the face of it, penance on one foot means to stand on one leg for a prolonged period and to chant or meditate, like we see many savants doing in the Kumbh Mela.

However, Morari Bapu, while speaking on Ramayana, said Ek Pad Tapa (one-foot penance) has 5 specific meanings. If a person, especially in contemporary context, has conviction in these, it can be said that he qualifies to have done Ek Pad Tapa:

(I shall not abandon Narada's advice; whether I get a home or it collapses.  He who does not have conviction in the words of his Guru, cannot obtain happiness or special powers even in his dreams.)

Morari Bapu also gave an extraordinary meaning to the confluence of the Bay of Bengal, Arabian Sea and the Indian Ocean at point of our country's extremity.

He said Kanyakumari is a symbolic convergence of the stream of Ma Kanyakumari's Tapa or penance.

The second stream is that of Swami Vivekananda's Tyaga or sacrifice. He gave up his secluded life to visit the US and take to it the message of India and the wisdom of the sages.

The third stream was the stream of Kanyakumari's Titiksha or forbearance. There is much that Devi Parvati suffered during her trials and travails. But Bapu said that there is another meaning of Titiksha. It is when a person tolerates the fiery speech of another person, and endures criticism and derision even though the person has appropriate answers to silence the other. If one chooses not to answer back while bearing the insults heaped upon by another, then that too is Titiksha.

The great memorials in the ocean are an unspoken salute to Mother India for she symbolises much of what Kanyakumari embodies and epitomises.