As part of the Vision 2030 of the Saudi Prince, other significant elements of Indian culture like yoga and Ayurveda apart from the Ramayana and Mahabharata will also be included in the school curriculum, according to media reports.
A tweet about Prince Mohammed bin Salman's new vision for the education sector in Saudi Arabia, Vision 2030, involving the history and culture of different countries in the country's curriculum, has gone viral.
The tweet by Nouf Almarwaai included screenshots of son's social studies exam with questions about Hinduism, Buddhism and Hindu epics the Ramayana and Mahabharata. "Saudi Arabia's new #vision2030 & curriculum will help to create a coexistent,moderate & tolerant generation. Screenshots of my son's school exam today in Social Studies included concepts & history of Hinduism, Buddhism,Ramayana, Karma, Mahabharata Dharma. I enjoyed helping him study," the tweet, with the screenshots of the question paper, read. 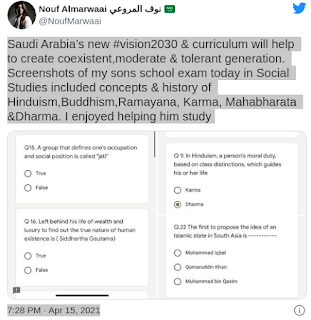 As part of the Vision 2030 of the Saudi Prince, other significant elements of Indian culture like yoga and Ayurveda apart from the Ramayana and Mahabharata will also be included in the school curriculum, according to media reports. The English language has also been made mandatory under the new vision, the reports claimed.
Nouf, who is also a Padma Shri awardee for being the first certified yoga instructor in Saudi Arabia, tweeted about the new curriculum on April 15. Since then, the tweet has been doing rounds on social media platforms for the diversity in curriculum adopted by the Islamic state. The tweet was also appreciated and retweeted by Rajya Sabha MP Dr Vinay Sahasrabuddhe. Nouf, who was born with an autoimmune disease, has been known to play a crucial role in legalising yoga in Saudi Arabia.
--
कथा : विवेकानन्द केन्द्र { Katha : Vivekananda Kendra }
Katha Blog : http://katha.vkendra.org
Katha Google Group : https://groups.google.com/forum/?hl=en#!forum/daily-katha
Vivekananda Rock Memorial & Vivekananda Kendra : http://www.vivekanandakendra.org
Read n Get Articles, Magazines, Books @ http://prakashan.vivekanandakendra.org