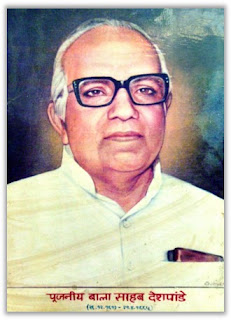 Shri Ramakant Keshav Deshpande alias Balasaheb Deshpande was born on 26th December 1913 (Margashirsh krushna 14 shake 1835) in Amaravati, Maharashtra.
His primary education was in Sagar in Madhya Pradesh as well as in Akola and Narsingpur in Maharashtra. He passed his matriculation examination from Kashi Hindu Vidyapith. He acquired Bachelor's degree in arts (B. A.) in 1935 and later got degree in law in 1937 before starting his law practice. He further did his masters in arts in 1938. (M. A.)

Balasaheb Deshpande had a very active role in freedom struggle. After independence, he got opportunity to work as a Regional co-ordinator for state department for welfare of backward communities at Jashpur in Madhya Pradesh. It was vision of Thakkar Bappa who feared anti national movement in Jashpur that Balasaheb was asked to take appropriate responsibility. After sad and sudden demise of respected Thakkar Bappa, Shri Deshpande left government job and resumed his law practice. Shri Deshpande had several occasions to have fruitful interaction with Sarsanghchalak, revered Guruji and during one such interaction idea was mooted to establish a dedicated institution for Vanavasis.

Accordingly on 26th December 1952 which happened to be birthday of Shri Deshpande,  Vanavasi Kalyan Ashram (VKA) was founded in Jashpur. Royal family of Jashpur patronised VKA's mission right from its inception. In 4 years of its setting up, VKA received acclaim of then Honourable President of India Dr. Rajendraprasad during a convention held at Rashtrapati Bhavan.

VKA work which started in Jashpur, Madhya Pradesh, soon extended to nearby states like Bihar and Orissa. Emergency declared in 1975 appeared like a setback and an administrator was appointed for VKA while Shri Deshpande and many others were jailed. But emergency proved to be boon in disguise as VKA extended its operation to the entire country soon after emergency was called off. In 1981 VKA operations extended further to include all 7 north eastern states.