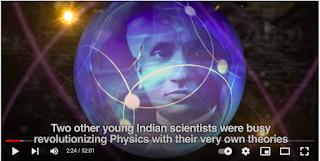 In his lecture 'The Cosmos' Swami Vivekananda said:
At the beginning, the intelligence becomes involved; and in the end, that intelligence gets evolved. The sum total of the intelligence displayed in the universe must, therefore, be the involved universal intelligence unfolding itself. This universal intelligence is what we call God. Call it by any other name, it is absolutely certain that in the beginning there is that Infinite cosmic intelligence. This cosmic intelligence gets involved, and it manifests, evolves itself,until it becomes the perfect man, the ..........Then it goes back to its own source. That is why all the scriptures say, 'In Him we live and move and have our being.' That is why all the scriptures preach that we come from God and go back to God.
This documentary won the prestigious National Film Award for the best educational film in 2013 in India. President Shri Pranab Mukharjee gave away this award in a glittering ceremony on 3rd May 2014.  It is an award for an extremely efficient and precise analysis of the contributions of three renowned scientists in a manner that not only educates today's generation but also provides insights into complex scientific phenomena in an accessible manner. At the turn of the 20th century, the world was witnessing a renaissance in the area of quantum physics through the work of great scientists such as Max Planck, Albert Einstein, Ernest Rutherford or Neils Bohr. Unknown to the world, three Indian scientists were also making significant contributions to the quantum world with revolutionary deductions, interpretations and theories.

Dr. Satyendra Nath Bose devised a statistical theory of counting photons - a revelation even to Albert Einstein -- that paved the way for the two great minds to work in tandem in formulating fundamental theories as the Bose-Einstein Statistics and Bose-Einstein Condensate. Boson, the class of particles that obey Bose-Einstein statistics, was named after Dr. S. N. Bose. Sir C. V. Raman gave the world what is known as the Raman effect, which redefined how we see light and colour. Another contemporary, Dr. Meghnad Saha produced an equation that explained stellar radiation and is regarded as one of the fathers of modern astrophysics. All the three scientists started their careers at the Calcutta University, became Fellows of the Royal Society, and Raman was the first and only Indian to be awarded the Nobel Prize for physics.

The film is a tribute to the three exemplary minds, the significance of whose contributions was of vital importance during that time, and even today with great strides being made in quantum physics, fibre optics, nuclear science or astrophysics. They were not only great scientists, but were rooted to the social and political realities of the time and dedicated their lives to modern science in India. Along with being institutions by themselves, they built stellar institutions in the country that inspired many great scientists of the following generations.