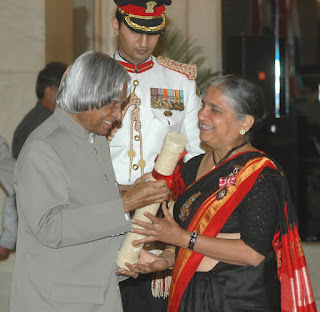 O India! Forget not that the ideal of thy womanhood is Sita, Savitri, Damayanti. - Swami Vivekananda
An eminent writer in English and Kannada, born on 19 August 1950, Sudha Murthy is a Social Worker. She worked with many organizations for the welfare of the common man. She was popular for her benevolent work through Infosys Foundation.

She works toward the betterment of the society and rural development. She aims to provide the government aided schools with computer education and library facilities. Apart from all her social works, she even taught Computer Science. She is also a renowned author of many fiction novels. She is also a member of healthcare initiatives of the Gates Foundations.

Sudha Kulkarni Murthy was born to Dr. R.H. Kulkarni and Vimala Kulkarni in Shiggaon, Karnataka. Sudha Murthy had done her BE in Electrical Engineering from B.V.B College of Engineering and Technology. She was the only girl student of his college which is having 599 male students. She obtained first in her class and received the gold medal from the then Karnataka Chief Minister, Sri Devaraj Urs.

Mrs. Murthy became the first female engineer hired India's largest auto manufacturer TELCO (Tata Engineering and Locomotive Company) now Tata motors. She worked as Development Engineer in various locations like Pune, Mumbai, and Jamshedpur. She was the first lady engineer of the company and opened the door for all other women also.

She then worked as Senior System Analyst in Walchand group of Industries in Pune. After being in Pune from 1974- 1981, Sudha Murthy moved to Mumbai. Sudha Murthy had contributed her Rs. 10,000 savings to the firm Infosys, in the founding of the company.

In 1996 she started with the Infosys Foundation and continues to be a Trustee of Infosys Foundation. She still loves teaching hence pursue her interest in providing knowledge and training to students in PG Center of Bangalore University as Visiting Professor as well in taught in Christ College.

While working in TELCO in Pune, she met her soul mate Mr. Narayana Murthy and they got married. They have two kids Akshata and Rohan. She is the pillar for the success of Infosys Foundation. She is still associated with her husband to build up the company.

Sudha Murthy is famous for many of philanthropist works.  She aims to empower women. She spreads the awareness of rural education, public hygiene, poverty alleviation and much more. She imbibes the need to maintain clean India, hence building up toilets for public. She has been passionate in helping people in flood affected areas too.

Being an Author, Mrs. Murthy has published many stories. Her writing had a flavor of common lives. She wrote on hospitality, her childhood, realizing views on donations and charity. Many of her Kannada books got translated into English and some got adapted into TV series.  Many of her works were children's series. Sudha Murthy is a bountiful fiction author in Kannada as well English. Most of her publications were through Penguin.

One of her famous work was the "How I taught my grandmother to read and other stories ". The book was translated into 15 other languages. It reflects her childhood association with her paternal grandparents. Her first novel titled House of Cards narrates the turmoil faced by the wife of a lucrative doctor.

She  is  the  chairperson  of  Infosys Foundation and has handled 13 national disasters in the last 23 years. She studied in a Kannada-medium school till the 10th standard and fell in love with the language. Her strong ties to the language and its people led her to establish more than 60,000 libraries in Karnataka. She also strongly believes in creating awareness for social causes and has passionately traveled the world for this purpose including universities  and  gatherings  in  USA,  Columbia,  Kuwait,  Saudi  Arabia,  Pakistan,  New  Zealand,  Australia,  England,  Thailand,  Vietnam,  China,  Tibet,  and  Singapore.  A  prolific  writer  in  English  and  Kannada,  her  books have been translated into all major Indian languages and have sold over 26 lakh copies around the country. She is a columnist for English and Kannada dailies with 30 books and more than 200 titles to her credit  –  including  novels,  non-fiction,  children's  books,  travelogues,  technical  books,  and  memoirs.  She  has  also  received  seven  honorary  doctorates.  Some  of  her  awards  include  the  R.K.  Narayan  Award  for  Literature,  the  Padma  Shri  in  2006,  the  Attimabbe  Award  from  the  government  of  Karnataka  for  excellence  in  Kannada  literature  in  2011,  and  most  recently,  the  Lifetime  Achievement  by  Crossword  Book Awards in 2018. She lives by the belief that "Generosity of a few is hope for millions".

From the start of her education, she had won many prestigious awards. Sudha Murthy got recognized for the Raja-Lakshmi award by the Sri Raja-Lakshmi Foundation in Chennai in 2004. She won the award for her outstanding performance is Social works. She won the Padma Shri, the fourth highest ranking official as per the Government of India and even obtained a doctorate for her publications.
--
कथा : विवेकानन्द केन्द्र { Katha : Vivekananda Kendra }
Katha Blog : http://katha.vkendra.org
Katha Google Group : https://groups.google.com/forum/?hl=en#!forum/daily-katha
Vivekananda Rock Memorial & Vivekananda Kendra : http://www.vivekanandakendra.org
Read n Get Articles, Magazines, Books @ http://prakashan.vivekanandakendra.org
Let's work on "Swamiji's Vision - Eknathji's Mission"
Follow Vivekananda Kendra on   blog   twitter   g+   facebook   rss   delicious   youtube   Donate Online