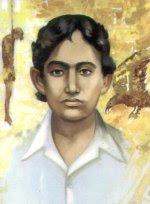 Khudiram Bose was born in Habibpur village of Midnapore district of 3rd December, 1889. His father was Trailokyanath Bose. In his childhood very unfortunately he lost his parents. So he was to be brought up by his sister.

Khudiram Bose was first admitted to Hamilton School of Tamluk and after completing his education there he was admitted to Midnapore Collegiate School. He loved the life of a revolutionary. The shame of dependence of the country would hurt him. He sustained a strong and hard mentality against the British government.

In 1906, when Khudiram was engaged in distributing a revolutionary magazine named, 'Sonar Bangla' – he was arrested by the British police. He somehow managed to escape from their grip by injuring them. On that occasion he was acquitted and allowed to go unpunished in consideration of his tender age.

After this incident he joined the secret extremist group. In 1907, by robbing mailbag he helped the secret group a lot in their activities.

During that time Kingsford, the chief presidency magistrate was crushing the individuality and liberty of people of Kolkata by abusing his power and authority. People all around became panic – stricken by the unjust and cruel exercise of his power. At this the revolutionaries took a firm decision to kill him. But the authorities became aware of the conspiracy and accordingly for his safety and security they sent him to Muzaffarpur. Khudiram  and Prafulla Chaki left for Muzaffarpur to accomplish the task of killing him.

In the history of Indian freedom movement, 30th April of 1908 was marked as a most significant and remarkable day. At about 8 p.m. a phaeton was returning from the European Club. Khudiram Bose considered that the car was carrying Kingsford. So with a motive to kill him, he hurled a bomb at that car. But Kingsford was not in that car. Instead there were two European ladies and they were killed. Khudiram ran away swiftly from that spot. But later on he was arrested. After judicial trial he was proved guilty and as a convict he was sentenced to death by hanging. Khudiram  Bose welcomed this penalty most cordially singing the glorious song of death on the 11th August, 1908.
--