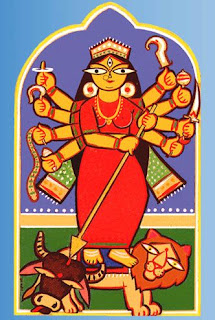 Jamini Roy was one of the greatest painters of the 20th century. He was born in the year 1887, at Beliator village in Bankura district of Bengal. His father, Ramataran Roy, was a middle class man who resigned from government service to pursue his interest in art. In 1903, when he was only 16 years old, Jamini Roy came to Calcutta (now Kolkata) to enroll himself in the Government School of Art. There, he received tutelage from Abanindranath Tagore, famous for his valuable contribution in the field of modern art.  As the biography and life history of Jamini Roy unfurls, we get to know that in the early days of his career as an artist, his paintings came across as bland and dull. In the mean time, he started doing odd jobs in order to survive. It was in 1925 that he discovered his true calling outside the Kalighat temple in Calcutta. Jamini recognized his preference as well as interest in the field of Kalighat paintings. From that time onwards, his paintings started reflecting the Kalighat style. By the early 1930s, Jamini Roy became fully conversant with the lines of the Kalighat idiom and switched over to the native materials.  With the passage of time, his paintings started reflecting more and more influence of the indigenous art of Kalighat painting, along with the terracotta's of the Vishnupur temple. However, around mid-1930s, Jamini Roy left the conventional practice of the canvas and started making painting surfaces out of cloth, wood or even mats coated with lime. He even started experimenting with natural colors, using earth, chalk powder and vegetable colors instead of dyes. From 1930 onwards, the career of Jamini Roy took an upward turn and the trend continued till he left for the holy abode, in the year 1972.  His Style The paintings of Jamini Roy, which belong to the early 1920s, reflect the influence of Bengal School mannerisms. He also made some excellent paintings that marked his entry into the Post-Impressionist genre of landscapes and portraits. Many paintings of Jamini Roy have been based on the everyday life of the rural Bengal. Then, there are numerous ones revolving around religious themes like Ramayana, Radha-Krishna, Jesus Christ, etc. Jamini Roy also painted scenes form the lives of the aboriginal Santhals.  Recognition Jamini Roy's paintings were put on exhibition for the first time in the British India Street of Calcutta (Kolkata) in 1938. During the 1940s, his popularity touched new highs, with the Bengali middle class and the European community becoming his main clientele. In 1946, his work was exhibited in London and in 1953, in the New York City. Jamini Roy was awarded the Padma Bhushan by the Government of India in 1955.
Famous Works