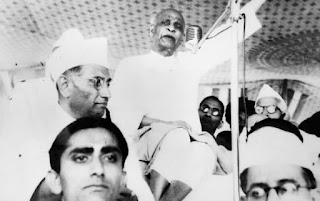 "One can take the path of revolution but the revolution should not give a shock to the society. " - Sardar Vallabhbhai Patel
There is, of late, a revival of interest in Sardar Vallabhbhai Patel. Earlier everybody was content with a small lesson in school titled the 'Iron man of India'. We were content to learn that he lead the farmers' movement in Kheda first and then in Bardoli, near Surat in South Gujarat. Gandhiji had called him Sardar after the Bardoli Satyagraha was successful. Sardar Patel is being revisited in public arena perhaps to remind the youth of India that they need to emulate his basic and fundamental values in which he believed and fought for. It should be remembered however, that he was also an ordinary young man to begin with and his resolves and practices made him a strong leader. His life inspires the youth to follow the path he treaded.

In the above context it is important for us to understand Sardar Patel. It will be useful to know that Sardar Patel built his persona from his childhood by sheer hard work and experience. Born in an ordinary Patel family in Nadiad on October 31, 1875, whose main occupation was farming, Vallabh bhai was third son among five brothers. His father fought against Britishers along-with Rani Laxmibai in 1857.   His eldest brother Vitthal bhai Patel, who is also a great person in his own right in the history of India's Independence, had got most attention. All farm and family related labour and drudgery work came to this third son of the family. Vallabh bhai did it without resentment and hence gained immense experience and became worldly wise. It made him physically strong and mentally prepared to do every work that came his way. He developed robust qualities of being tough and straight. He has noted that that from his childhood he was blunt and bold. But he was bright. He went to school after he was twelve years of age. He was a good public speaker but used simple language. He had sense of humour. He was self-made man.

He was also warm and witty with those whom he came close to. However, he hardly disclosed what went on within. His commitment to the family was also noteworthy. It is worth recalling that in his youth he made a huge sacrifice for his elder brother Vitthal bhai. Vallabh bhai had worked hard as a pleader and saved substantial amount to pay for his expenses for going to England and studying law. He sent an application and received admission documents. However, the admission was granted to Mr. V.Z. Patel. Vitthal bhai his elder brother also wanted to go to England and study law. He saw the Cover containing the admission documents and suggested to his younger brother Vallabh bhai that he would go first as his name also happened to be V.Z. Patel! Vallabh bhai gracefully sacrificed his turn. He not only made way for Vitthal bhai, but also took care of his brother's wife with all respect and attention.

Unlike other young people of those days, Vallabh bhai finally went to England to become a Barrister when he was 37. Later on he started his practice in Ahmedabad and was soon successful. He had developed his interest in playing Bridge. He was observing Gandhiji but was yet reluctant to get into the programmes. But soon he developed deep admiration for Gandhiji. It is a peculiar chemistry that worked between the two. Let us remember that both met at a very mature age. Kochrab Ashram came up in 1915 and sometime in 1917 both met. Gandhiji was 47 and Sardar 40.

Vallabh bhai had settled in Ahmedabad and his practice was good. In 1917 he was also elected to Municipal Board. He had become Chairman of Sanitation committee. In the same year plague broke out in the city and Vallabh bhai Patel handled it firmly and well. He showed personal courage and made good arrangements to contain the epidemic. It was realised that the then Municipal Commissioner was not responding and great resentment had built up against him. Vallabh bhai Patel led the protest and got the Commissioner removed. The point to be noted is that Vallabh bhai Patel was already in public life and hence he measured Gandhiji and then went him. What impressed Vallabh bhai Patel most in Gandhiji was his quality of walking the talk. He could clearly see that Gandhiji did practice what he said should be done. Hence, when Gandhiji asked in the meeting for strong full time volunteers, Vallabh bhai Patel got enrolled. He provided competent leadership to farmers' 'no tax campaign'. Soon after Kheda Satyagrha he became a leader of repute in Congress and headed the Gujarat Provincial Congress Committee and he remained its President until 1946.

Gandhiji influenced Sardar Patel to the innermost core. He was fully convinced that Gandhiji's way was right for fighting for independence and he also internalised that without changing the self and adopting simplest possible material life it was not possible to be public arena and fight for the cause of freedom of nation. He gave up Western clothes and took up to regular spinning and wore Khadi. Vallabh bhai Patel accepted Gandhiji as his supreme leader and became a leader in his own right. He served the Gujarat Provincial Congress with his innate capability of organiser. He served the Ahmedabad Municipal Congress for a long time and between 1924 and 1928 he was President of Ahmedabad Municipality. He took strong decisions and withstood all kinds of adverse pressures. In widening the present Tilak Road of Ahmedabad he dealt sternly with the house and shop owners whose properties had to be removed. Some tried to give the problem a communal colour, but Vallabh bhai steadfastly tackled the problem as a physical planning issue in a municipal area.

Gandhiji called him Sardar after the Satyagraha offered by farmers in Bardoli in Surat District. Farmers were asked to pay more land revenue than what was due. Gandhiji asked Vallabhbhai to take up the cause. An able organiser that he was, Vallabh bhai galvanised extraordinary courage among farmers. British administration would attach moveable and immoveable property in lieu of revenue. Vallabh bhai also inspired women of the area to such an extent that women challenged their men to fight and go to jail for the cause. It was long drawn battle, but ultimately, the British government gave in. Due credit came Vallbha bhai's way and Gandhiji called him Sardar. Swaraj Ashram Bardoli was set up which until today is a live organisation trying to work on Gandhian principles.

A lesser known fact is that Sardar Patel was one of the co-founders of Gujarat Vidyapith, Ahmedabad with Gandhiji and other associates. He was Vice Chancellor for long years from 1930 onward and also functioned as its Chancellor in 1948 after the Gandhiji's assassination. His frankness and firmness are reflected in the following incidence. In 1933-34 when the Government decided to seal Gujarat Vidyapith, Gandhiji and Kaka Saheb Kalelkar took decision to transfer the University Library to the Ahmedabad Municipality. Sardar Patel was in jail. When he came out of the Jail, he learned about this decision. He confronted Gandhiji and told him that his decision was arbitrary. Only the full Board of Governors could take such a decision in a formal meeting. Gandhiji conceded the point and Sardar got the University Library back. Today, Gujarat Vidyapith Libraries is one of biggest Library in Gujarat with more than eight lakh books.

After Independence Sardar Patel showed rare nerves of steel in unifying the country. Sardar Patel Integrated 562 Princely States. The success of his endeavours are sung loudly and deservingly so, but one should not underestimate tremendous pressure which he went through. It affected his health. He suffered heart attack and could not really recoup. He passed away on December 15, 1950.

Getting Junagadh Nawab and other princely states in Saurashtra was not easy task. It took all persuasion and covert exercise of power and authority. This feature of his personality blossomed fully in the process of integrating the princely states. Getting Hyderabad Nawab to surrender is a story of steel will and display of well calibrated power. So was the case of Bhopal. Sardar understood the complexity of the Kashmir problem and was in agreement with Nehru. He would have liked to try and handle in a different way.

Hard work, honesty, frankness, firmness, cool and steely nerves made Vallabh bhai real Sardar – the leader. He shows us the way. It is slogging with all will that you gain heights. It is as said, one per cent inspiration and ninety nine per cent perspiration.