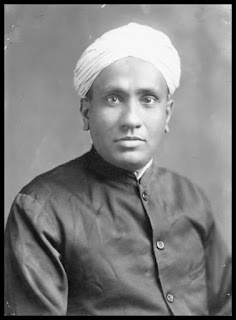 "Ask the right questions, and nature will open the doors to her secrets." - C. V. Raman

Sir Chandrasekhara Venkata Raman was one of the most notable physicist in the world who did ground-breaking research in the field of Light, which is now known as the Raman Effect, and won him the 1930 Nobel Prize for Physics. We celebrate National Science Day on 28 February every year to commemorate the discovery of the Raman Effect in 1928. C. V. Raman was responsible for laying a firm foundation of scientific research in our country. Due to his initiatives, India has made a mark in the world as a nation with ample technological and scientific capabilities and manpower. Whatever technological development we have seen today it is "Raman Effect"! The very fact that he brought laurels to India as far back as 1930 by winning the Nobel Prize, speaks volumes about his scientific genius. He donated his all money of Nobel Prize to the Freedomfighters.  A grateful nation honored his efforts with a Bharat Ratna in 1954, the top most honor that could be bestowed to an Indian citizen.

C. V. Raman was born on 7 November 1888, in Thiruvanaikoil, Tiruchirappalli, which was under the Madras Presidency during British India, where his father was a school teacher. After his schooling there and late at Viskhapatnam, Raman joined the Presidency College in Chennai. In 1904, at the age of 16 he graduated with a gold medal in physics in 1907 obtained the M.Sc. degree from University of Madras.

From 1907 onwards, for 10 years Raman worked as an accountant in the government Finance and Accounts services in Kolkata and held a senior position.

In 1917, Raman resigned from government service after his appointment as the first Palit Professor of Physics at the University of Calcutta. He also continued doing research at the Indian Association for the Cultivation of Science (IACS), Calcutta, where he became the Honorary Secretary. Raman would call this period as the golden era of his career.

On 28 February 1928, at the IACS, Raman conducted experiments with K. S. Krishnan and other colleagues, on the scattering of light, during which he discovered the Raman effect, which gave further proof of the quantum nature of light.

Raman spectroscopy was referred to by Ernest Rutherford at the Royal Society in 1929. Raman was the President of the 16th session of the Indian Science Congress held in 1929. He was conferred a knighthood, received several medals and honorary doctorates from various universities. Raman was awarded the 1930 Nobel Prize in Physics. He was the first Asian and first non-white to receive any Nobel Prize in the sciences.

In 1932, Raman and Suri Bhagavantam discovered the quantum photon spin. Raman also held the position of permanent visiting professor at BHU. Raman also worked on the acoustics of musical instruments like violin, table and mridangam. Raman and his student, Nagendra Nath, provided the correct theoretical explanation for the acousto-optic effect or light scattering by sound waves which was called the Raman–Nath theory.

In 1933, Raman left IACS and joined Indian Institute of Science in Bangalore as its first Indian director.

In 1947, he was appointed as the first National Professor of Independent India. Raman retired in 1948 from the Indian Institute of Science. He also started the Travancore Chemical and Manufacturing Co. Ltd. which later subsequently established four factories in Southern India. In 1949, he established the Raman Research Institute in Bangalore. He served as its director till his death in 1970 at the age of 82.
Personal Life

He was married to Lokasundari Ammal on 6 May 1907. They had two sons named Chandrasekhar and Radhakrishnan.

Raman was honored with a large number of honorary doctorates and memberships of scientific societies. Several roads, buildings, and awards have been named after him.